In France, families are officially represented by an institution called “l’Union National des Associations Familiales” or National Union of Family Associations, in charge of promoting, defending, and representing the interests of all families living on French territory, regardless of their religious beliefs, political persuasions, or their origins. The law grants this association one percent of the total financing of family allowances, that which in 2009 represented an annual public financing of 20 million euros. The code of families and social action states that “The national union is composed of several departmental unions of family associations – UDAF – and of federations, confederations, national family associations, regrouping the associations and members adherent to the departmental unions .” Unfortunately, the Union of laïc Families – UFAL – is therefore a minor component of this institution as statistically, despite the neutrality intended by the legislator, UNAF is primarily made up of movements ideologically linked to the social doctrine of the catholic church, and defending a reactionary vision of society where families conforming to a church-promoted model would be the base.

In this context, UFAL is a forerunner in the fight for secularism and social equality estimationg that is is the simultaneous liveration from religious, communal and economic dogmas that will advance the equality promised by the Republic.

In addition to the daily actions of UFAL members, carried out depending on the specific needs of their region, at a national lever, UFAL has by means of “la journée de la laïcité” – or secularism day – the ninth of December, several symbolic actions that aim at promoting secularism to a target audience of ranging from primary through to high school aged students. This is why we have edited a brochure targeted at young people that may be used by teachers to bring about awareness of secularism among their students.

Moreover, UFAL has put in place, in partnership with private health insurance organisations which are a part of the social and solidarity economy, a system of accompaniment with complimentary care of social security. In effect, although we strive tenaciously for a democratic system of social security with a full reimbursement for necessary and useful care.

UFAL is also a forerunner in dealing with the problem of accommodation and family allowances.

But I would like to discuss with you a struggle in which UFAL has been very much involved: the struggle for the right to gay marriage.

UFAL has always, since its creation, aimed at equality between families of all types, be the parents married, joined in civil union, or simply just living together, and be the children natural or adopted. PACS is a form of civil union that has been a step forward to the creation of rights other than marriage. We therefore view the recent vote, passed at a large majority, that allowes same sex couples to get married as a great step forward towards our goal.

We have been heard by deputies, senators, and members of parliament in charge of the bill many times. We have participated in many public debates, many having been televised or broadcast on radio.

It is a victory that is at once concrete and symbolic. Concrete because it sets up new rights that a part of the population were deprived of. Symbolic because it permits end the long separation between the civil union, juridically set up by the French Revolution, and the religious marriage; a separation that the impact of which has clearly not been understood by those opposed to the bill. The deputies who voted for the law have therefore the Republic to progress.

The law also put an end to an injustice has had much less media attention than marriage and adoption rights. It will allow on the acknowledgement of couples with a PACS as families entitled to the right to vote at UNAF, 14 years after creation of PACS. It will also allow the membership of gay parents associations to the departmental unions of family associations.

UFAL, a family association that supports republican and secular ideas within UNAF, supports this progress for the diversity of families represented by UNAF. We indeed wish that it reflected the diversity of families and the French society as a whole, and stopped focusing on traditionalist family structures, that are both non-secular and in decline.

Nevertheless, UFAL regrets not having been heard about on the subject of the broadening definition of PACS, questions of parenthood, and access to medical assistance for conception, while some of its positions seemed to be agreed on by the minister in charge of family affairs and are shared by many parliamentary members of the party in power. We therefore demand that the future law on families, announced by the government, tackle all questions in abeyance. We will also pay attention to the decree of application of the law and hope that the Ministry of Justice will give up the idea of a family record book reserved to gay couples and will maintain a family record book for all.

In conclusion, we firmly have condemned the consequences of the protest movement against this law and their support by the catholic hierarchy. As a matter of fact, the methods and ideology of the movement “Manif pour tous” – or “political demonstrations for all” – of Civitas, of the National Front and of a large section of the right-wing, have maintained civil disorder and a rise in homophobia that has brought about attacks against because of their sexual preferences. 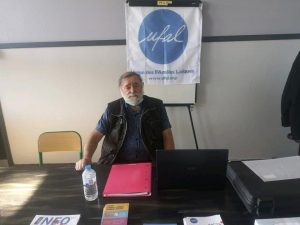